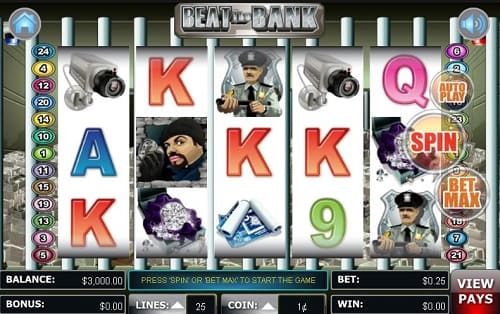 Become a professional bank robber playing the Beat the Bank slot from WGS Technology. You get to be part of a heist that can end up with riches in your account and without the legal consequences. That is because it is an online casino slot that is played at the best US casinos for real money.

Stealing, or instead winning the big jackpot on Beat the Bank is not the only thing you can look forward to when playing the game. It has other great features on the reels that will improve your winning chances and create even more winning combinations. Read our Beat the Bank slot review to find out what the great features are.

Beat the Bank is five reels and 25 paylines online slot game. All your winning combinations are multiplied by your wager amount. Some of the symbols on the reels are theme related such as the thief, security guard, bag of diamonds, surveillance camera and the vault. The traditional symbols which are found on most slot reels are the card numbers and symbols which are the lowest paying symbols on the reels.

Two game features can be triggered on the reels. One is triggered by the wild symbol and the other by the scatter symbol.

The wild free game feature is triggered when the thief symbol appears on reels two, three and four at the same time. You will be awarded 15 free games, and all the prizes won the games are tripled. The free games feature can be retriggered.

As we have mentioned before a bit about the scatter game feature. It is activated when three or more scatter symbols land on the reels. There will be two safes on the screen, and you will have to choose one to reveal your prize. You will continue to choose a safe until you can’t open the safe. Each time a safe opens, the prize you get will be doubled. You can win up to 1024 times of your bet that triggered the Beat the bank feature. This bonus feature can also be triggered in the free games feature round.

Play Beat the Bank at US Casinos

Beat the Bank has excellent features that make playing this slot game enjoyable and worth your real money bets. You can sign up at any of the listed sites below to play Beat the Bank for real money. You can even use the welcome bonus that the casino gives you if it applies. Sign up today!