The Funny Moolah slot game has been developed by WGS Technology and has a mafia theme. When it was released, it never became popular among players, but it has since piqued the interest of many players. If you are interested in trying your luck on this slot game but aren’t sure what awaits you, read our Funny Moolah guide below.

You will not only know what the game is about, but you will also find out about the game features, how to play the game and the payouts. In addition, we have also listed some of the best casinos that accept US players for you to sign up with and play the game for real money. As a result, continue our slot review reading and find out more about the Funny Moolah slot game.

The Funny Moolah slot game has five reels and 25 paylines. Unlike other slot games, this WGS game has only theme-related symbols, and those include a policeman, a lady, a club, the mafia boss and others that are low paying symbols.

There are two common features on the reels, and they are activated by the wild and scatter symbols. The mafia boss acts as the wild and will substitute any of the symbols on the reels except for the scatter. What’s more, the wild symbol only lands on reels two, three and four.

The club symbol represents the scatter symbol, and it will trigger the free spins feature. To trigger the spins, you need to land three or more scatters on the reels. You will be awarded ten free spins with a multiplier.

Another exciting feature is the Boss Man feature. When the boss appears on reels two, three and four at the same time, nine piles of loot will appear on the screen. You will have to choose four to reveal the prize. What’s more, you can trigger the Boss Man feature in the free spins round. 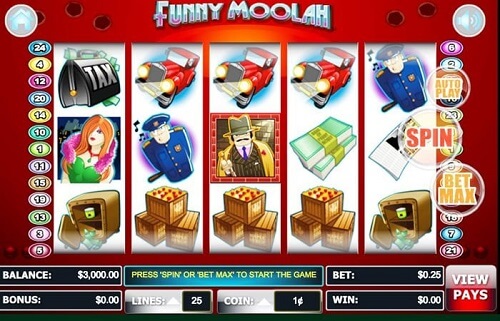 Find Funny Moolah at US Casinos

Funny Moolah gives you a chance to play for a big jackpot. It offers simple gameplay and bonus features that can bump up your bankroll. Find the game at the listed casinos and it for real money and win the big jackpot.