A Review of the Egyptian Heroes Slots Game

Egyptian Heroes is a creation from the mind of Net Entertainment. A non-progressive, five-reel, 20 payline video slot game, players can step into ancient Egypt and embark on a quest towards great wins and an exceptionally crafted theme. The slot game comes with a scatter symbol, a multiplier, a wild symbol, a free spin feature and a maximum winning possibility of $20,000.

Perhaps the most striking aspect of the Egyptian Heroes slot game is the fact that it does not unveil anything that has not been done before, but that does not take away from the dynamics of the slot game – being both fun and entertaining. The symbols in the slot game include the gods of ancient Egypt including Amon Ra, Osiris and Isides. The slot game also has other symbols as well that make for an exciting experience. Find out how big your payout can be when you spin the reels of this slot game by reading our online slot review below.

Given that the theme of Egypt has been used before, one would surmise that this particular slot game is more of the same, but that is not the case. It features what are referred to as expanding wilds that show up on the second, third and fourth reels and replace other symbols in the game, creating winning combinations.

The slot game also has a scatter symbol. If three, four or five of them appear on the reels anywhere, then that triggers 10, 15, or 20 free spins respectively. During the free spins feature, a wild symbol occupies the entire middle reel thereby giving the casino player an opportunity to rack up lucrative wins. Additionally, the player can also complete winning bet lines with the wild symbols that show up on the second and fourth reels.

The winning in the Egyptian Heroes slot game does not end there. The most innovative aspect of this slot game is the feature known as the Golden Bet Line. In each respective slot spin, the feature turns one of the paylines into the Golden bet line, which offers a multiplier. This multiplier ranges from 2X to 5X. If the player wins on a particular line, marked immediately prior to the slot reels stopping, the prize that is received is multiplied by a multiplier indicated in the box above the slots reels. 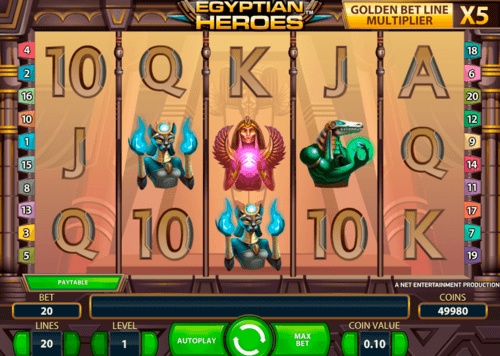 Overall, the Egyptian Heroes slots game packs a serious punch in the area of winning. From the Golden Bet line to other features, casino players will find that this is one of the best slots games to emerge from Net Entertainment in quite sometime. Casino players thinking this is just another Egyptian centred game will find that it is indeed that but also offers more in the area of winning and winning big with its features.