Hall of Gods slot is a NetEnt developed slot machine game which takes its inspiration from the old Vikings. If there’s anything that we love – it’s a slot game that is inspired by an old-world. This game is not only visually appealing but has a variety of symbols and bonuses that offer players more opportunities to win.

As you may expect all symbols are thematic. So, if you’re a fan of Norse mythology, you are going to enjoy this particular slot. Not only are the symbols linked with all things Vikings, even the dramatic background music makes you feel like you are part of that elite warrior group.

Would you like to find out more about how the game works, symbols and bonus rounds? If so, keep following a long as we detail what this exciting online slot game is about.

Hall of Gods is a 5 reel 20 payline slot machine with outstanding graphics. Moreover, the slot machine is fully functional on a range of devices including mobile and desktop. Even on Windows Linux and Mac OS.

All symbols are Norse mythology inspired. There are 10 different symbols you can expect to see on the rails. Five of which are Norse gods such as Freya, Irun, Thor, Loki and Odin.

The Norse gods’ symbols are the highest value symbols and the other five other low-paying symbols include a Viking axe, jewellery such as a silver and gold Viking ring. 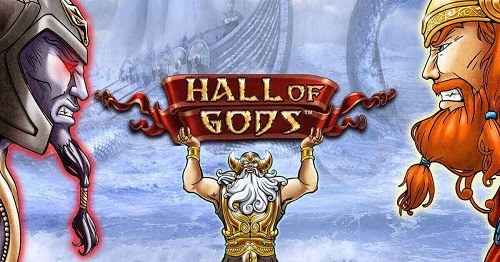 Bonus features include the wilds and the scatter symbols. The scatter symbol has the ability to trigger a free spins bonus round. The wild is the Serpent Wild which substitutes for all symbols except the scatter. The wild is only active on the second, third or fourth reels. When it appears on any of those wheels it then expands over 3 columns and forms an image of a wild beast emerging out of water and making ominous sounds.

A scatter symbol is made up of two black ravens atop a grave during a full moon. Different combinations of scatters will earn you varying numbers of free spins.

Thor’s Hammer is the second scatter symbol which activates a bonus game within the slot. You use the hammer to crack shields and reveal the prizes hidden behind them. There are three possible jackpots to be won in this round.

All things considered this slot machine is top quality. The wilds and two scatters make this game a better slot in terms of offering better odds and more opportunities to win. Moreover, there are multiple high paying symbols which means you can still win big even without the bonus features activated. Finally, the games graphics display as beautifully on mobile as they do on a desktop. We highly recommend you try out this slot. As with all their games, NetEnt really went out of their way to create a slot with a story which as visually appealing as it is functional.