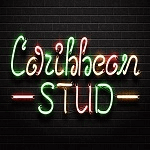 If we had to compare holidays to poker, Caribbean Stud Poker is like taking a walking on the island with a cocktail at hand and money in your back pocket. Regardless of whether you are at a brick and mortar or internet casino, you are sure to find several poker variations. One of the familiar forms is Caribbean Stud Poker. The exotic table game name should not make you anxious. If you know the basics of five-card stud poker, you are well on your way to playing at Caribbean stud tables.

How different is a Caribbean stud from the old fashioned five-stud poker game? Not much; however, the noticeable differences are that bluffing in a Caribbean stud game is non-existent. Players are playing against the house, and there are no draws being made. These are the three golden reminders that players can use to tell the two poker games apart.

The colourful history of the poker variation dates back to 1982 when Poker author, David Sklansky claims he invented the game as ‘Casino Poker.’ Another player in Aruba patented the game, and from there the game took off in popularity. It is unclear who created the game. Whoever did, it won’t take away the from the fact that Caribbean Stud Poker is a popular table game found in most casinos all over the world even with the best USA online casinos.

What is Caribbean Stud Exactly?

Caribbean Stud is a particular variant of poker that originated in the Caribbean Islands. Most records of the game refer to it as emerging in the early 1980s, however, there are many legends as to when it actually became popular. It is a table game that provides players with the opportunity to win a progressive jackpot. This has essentially added to the game’s appeal. The table game is played on a Blackjack sized table. The player is pitted against the casino dealer and his/her hand must beat the casino dealer’s hand.

How to Play Caribbean Stud Poker

Unlike in Texas Hold’em and Omaha, poker players are playing the house and no other players at the table. To play, gamblers should find a table, place their bet (ante) in the marked ante circle. Players can also place a progressive jackpot side bet.

The game begins with each player making a bet that is equal to the minimum at the particular table. This bet is placed in a circle referred to as the ante. The player then has the option of making an additional bet. The Caribbean Stud game has what is referred to as an automatic shuffler that deals the cards and each player receives a hand of card, 5 in total, each one facing down.

The dealer is dealt four cards down and one that faces up. This is where the Caribbean Stud game becomes like poker in that the players then look at their cards and decide whether they want to continue playing or forfeit. The dealer then turns over their cards and the hands are subsequently compared. If the player’s hand beats that of the dealer then the player is paid even money for their bet and the call bet is paid based on the game’s paytable. The game is considered to be quite slow in its pacing.

If the dealer does not have an ace/king in their hand, then the wagers that the player made will be voided and the players will receive even money on their initial bet only. Caribbean Stud is quite an interactive and entertaining game. While the game is relatively slow-paced, casino players have noted that it is very engaging and thrilling especially when there are multiple players. 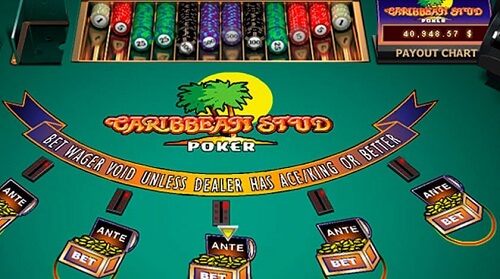 Players, when playing Caribbean Stud and beating the dealer’s hand, receive even money for their bet. The call bet that they win is dependent upon the hand that they have.

The rules of playing Caribbean stud are simple and easy to follow. Once every player has placed their ante, players will receive five cards each face down. The dealer will then deal himself five cards face down. He will then flip one of the cards to show face up. Once the dealer flips, his card players can look at their hand and decide whether or not they would like to place an extra bet. If players choose to fold, they will lose their ante bet and can only play when the next hand is dealt.

US players who are not ready to spend their money playing real money Caribbean Stud can find fun and free Caribbean stud practice tables at popular web-based casinos. Players can use the fun table to master the rules of Caribbean Stud Poker online before betting at real money tables. 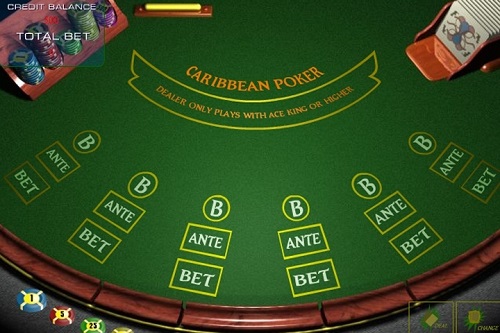 While surfing the internet, American players will come across a number of Caribbean studs of payout charts. The main bet chart will be used during every hand. The payout may vary from casino to casino, so be sure to check the tables for placing any additional bets. The house edge for a Caribbean stud ante is usually 5.224%.

When playing Caribbean stud, the most straightforward strategy to follow is always to bet hands that have an Ace and King. Raise and play any pair you have, and if your hand has less than A, K, it is best to fold. Players should raise if they have an Ace and King and the dealer’s upcard is a Q or lower

Players routinely look for ways to reduce the house edge in the game of Caribbean Stud. The player is recommended by casino enthusiasts not to fold any pair that has been dealt and always fold anything that does not have an ace and king in it. In essence, play any pair and fold anything less than ace-king.

While there are many different strategies that can be executed in the Caribbean Stud game, this is the most well-known one. When playing the A-K, players can effectively reduce the edge that the house has. This is for both the online and land version of Caribbean Stud. The house edge is noted by casino enthusiasts as being lowered to roughly 2.3% when this strategy is utilized.