Let It Ride for US Players 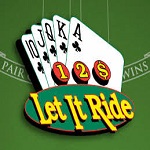 The game of Let It Ride is played at a more relaxed pace than other card games in the casino, whether it is online or off. This often makes it more attractive to advanced and older players rather than novice players. The game was invented by John Breeding, the founder of Shuffle Entertainment. This particular company owns the trademark associated with both the name and logo of the game.

Best Poker Sites in the USA

How to Play Let it Ride

The player may reduce their bet on either of these particular occasions, or neither, or on both. If the player decides not to withdraw their part of the wager, these players are said to Let It Ride. After the second community card is shown, if a player has a winning hand, what happens is that the player is paid out in accordance with the payout table. There are many nominal variations in the amount a player is paid based on the casino they are playing at, however, the lowest payout is for the pair of tens or better. Any pair of nines or lower is known as a losing hand, thus, the player has to forfeit their original bet.

As in the game of Blackjack, and video poker, decisions of the players who are playing Let It Ride directly affect the edge of the house. There are common side bets in the game that are permitted as well such as a bet on a hand of poker that is formed by a player’s respective three cards. This is often compared to the side bet known as pair plus in the casino game known as 3 card poker. Other side bets include a fixed payout that is based on a 5 card hand where there is a 2 pair start. 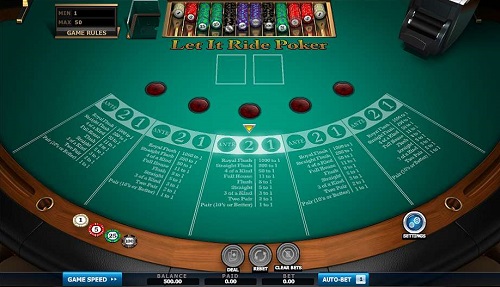 The game of Let It Ride can be said to be one of the most interesting card variations of poker. While not as popular as Blackjack or Poker, one can still find excitement and fascination in this strikingly entertaining game.