A lot of video slots these days follow a familiar pattern. Players can get five wild symbols for the top payout, and three or more scatters for a bonus game. Other than that, there aren’t many new features that have been tried, and a lot of games just seem like clones of each other.

The Boy King’s Treasure video slot, formerly known as King Tut’s Treasure, by Realtime Gaming is different. The concept in this game is that players have lots of different ways to win different variations of prizes based on a standard paytable. This idea makes for a very interesting and exciting gameplay.

Boy King’s Treasure uses 20 paylines spread across five reels. You can bet one coin on each of the 20 paylines, and coins can be set from $0.01 to $5.00 each. If you’re playing with all 20 paylines activated, this gives the game a betting range of $0.20 to $100 per spin, and this allows players of all walks of life to enjoy the game equally. What you’ll want to pay attention to in this game is that even though the highest standard payout is 1,800x for five of the Bracelet symbol, this game has a very high variance and gives players tons of ways to win a lot more than this on a single spin.

This video slot basically revolves around the Boy King wild symbol. The Boy King symbol is a 2x wild multiplier during the regular game. The second-highest payout is 1,000x for five of the Lion symbol, and you can get other wins from 750x to 100x. All of the top payouts are bunched together to a much larger degree than usual, and this helps to give players a lot of different chances to win similar-sized prizes.

Three of more of the scattered Snake symbol will trigger a set of 15 free spins. This probably sounds like something you’ve heard before, but there’s a catch. During the free spins, the wild Boy King symbols act as compounding wild multipliers of 2x, 3x and 4x. This means that you can get multipliers worth up to a total of 16x during the free spins, and that’s why it’s so much different than normal free spins bonus rounds. 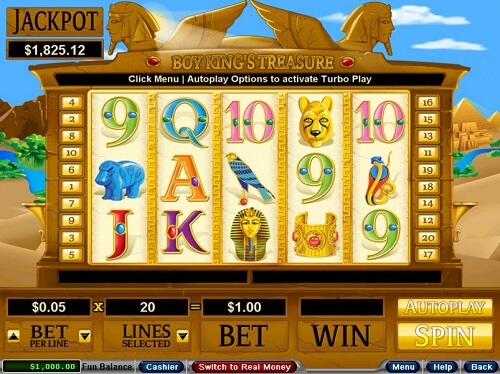 Overall, the Boy King’s Treasure video slot has a different concept than most video slots, but its reliance on the wild multiplier for big payouts give it very high volatility.