Generally, Christmas themed slot games have a joyful feeling about them where there’s nothing but love and thanksgiving happening. Rudolph’s Revenge on the other hand contrasts this idea of joy and happiness with revenge and anger towards Santa Claus and his elves. The storyline is centered around Rudolph taking revenge on Santa for years of hard work on his side which he feels has gone unnoticed.

The game is played on 5×3 reels and offers 50 paylines. It also features a progressive jackpot which is even more reason to play. See our table below for general information about the game.

This is a fairly simple game to play which has various ways to win. To win the ultimate jackpot you must align 5 Rudolph symbols on an activated payline. This sounds fairly simple, but it can get really tricky especially when you experience those near wins like 4 out of 5 Rudolph symbols on the reels. The jackpot amount will be added to your overall winnings and will be paid out at the end of the game. And, if you feel like making the game your own, there is an “options” button which allows you to customize the game to your liking. 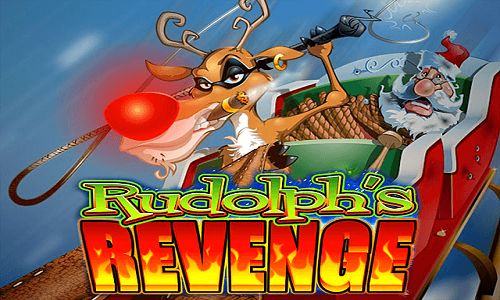 In addition to Rudolph who can bring you the ultimate win, there are other symbols with great functions that you can look forward to. There are wilds, scatter symbols as well as multipliers. The scatter symbols (which are presented by bombs) are interesting to align on the reels. Rudolph or a Santa symbol paired with a scatter symbol on an activated payline unlocks surprise effects and additional prizes for you to enjoy.

Some of the other symbols found in the game include Santa’s elves, snow, candy canes, Santa’s workshop as well as game cards K, Q, J, and Ace.

One of the special surprises includes a free spin bonus round. But, to activate this bonus game, you must align at least 5 bomb symbols in a row. During your free bonus game, Santa symbols and bombs have the same function as a Rudolph symbol. They multiply wins and act as wild symbols used to replace any other symbol on the reel to form a winning combination.

When you play Rudolph’s Revenge you can also stop the reels at any given time which puts you in control of your own fate. Usually, the game software is programmed to stop automatically at random times.

Rudolph’s Revenge has a mandatory rule where you have to bet 50 lines per spin. However, this is doable given the fixed maximum bet of only $2 every time. When broken down, you pay only 4 cents per payline.

As far as payouts go, Rudolph’s Revenge only pays out on the highest valued combination that you have out of all 50 paylines. All others then become null and void. Also, winning symbols must go from left to right with the exception of scatter symbols that can be scattered all over. Apart from the jackpot, the most you could win from the game is 50 000 times your initial bet.