The Pay Dirt slot features a progressive jackpot that can be triggered after each spin of the reels. What’s more, it is randomly triggered, so you have to spin the reels to scoring the jackpot. There are more bonus features on the slot reels. Find out about them when you read our Pay Dirt slot review below.

How to Play Pay Dirt

The Pay Dirt is five reels, three rows and 25 paylines slot game. The symbols that you can use to make winning combinations include; bandits, a miner, a donkey, mining cart with golden nuggets, an axe, a dog, dynamite, the mine entrance, a lantern and mining pan. The golden nugget symbol acts as the wild symbol and will replace all the symbols on the reels, excluding the scatter. The Pay Dirt sign acts a scatter, and when you have three or more of the symbols, you trigger the free spins bonus.

The second bonus feature is the Gold Fever. When you trigger this feature, you will be awarded five free spins, and the third reels will be a golden reel, which means the reel will have the wild symbol.

The last bonus feature is the Strike it Lucky bonus. There will be five gold mines where you will have to pick mine to uncover a bonus symbol. You will also be awarded ten free spins, which can also be retriggered. 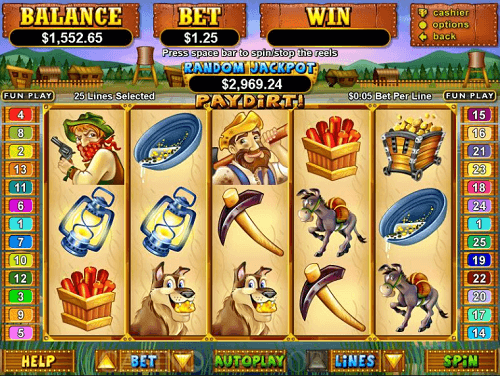 RTG has been able to develop the Pay Dirt slot game to be one of the most popular loosest slots out there. What’s more, it features a progressive jackpot, which means that you will be walking away from a winner when playing this online slot game. Find the slot game at the best RTG casinos that accept US players and pay for real money to have a chance to win the progressive jackpot.