If you are interested in this Warlock’s Spell slot and want to know more about the game features and other things related to it read our review down below. We also have a list of the best RTG casinos where you will be able to enjoy the Warlock’s Spell game and many other titles.

RealTime Gaming is known for creating and crafting slots games that are unique and impressive and Warlock’s Spell is no different. This game comes with sounds and graphics that will blow casino players away as well as characters that are full of magic. There are witches, warlocks, magic potions, black cats and spellbooks to name a few. The slot also has quite a few dynamic features that will make it worthwhile for the casino player to play it. The Warlock’s Spell slots game will, however, require that casino players have some money.

There are many coin amounts that casino players can play among the maximum of 20 paylines to choose from. The values range from 1 penny to $5 essentially meaning that the betting amounts range from 1 penny to $100 per each spin. In addition to this, the game is a progressive jackpot slot that is awarded at random, making this a whirlwind of wins for the casino player.

So what exactly is so wonderful about Warlock’s Spell? The slots game has two wild symbols to start off with, which is quite rare in video slot games. Each of these symbols can replace the other symbols with the exception of the spell books, which acts as the scatter. The difference between the wild symbols is where they can be seen. The witches are one of the wild symbols and only show up on the 1st, 2nd and 3rd slots reels, while the warlocks are the other wild symbols and only show up on the 3rd, 4th and 5th slots reels. 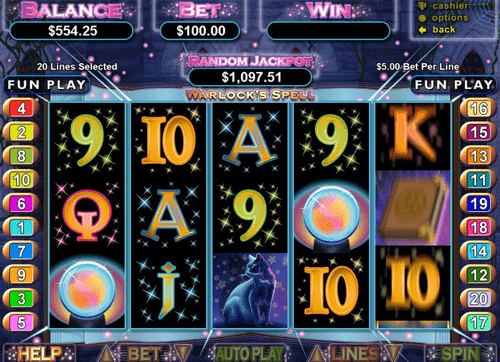