Indiana Jane and the Golden Tombs of Katun

Meet Jane, an archaeologist whose feisty with brains and can solve any riddle. This slot game is one of the most interesting to come out in a long time as the player can join Jane and her assistant as they unearth symbols pertaining to the Mayan myths that have not yet been revealed. Throughout the deep jungle, Jane leads the player from clue to clue and to the crossroads of ancient treasure and the Mayan legend.

Explore the secret tombs and learn the wisdom of the Mayan wizards. Players that find three scatter symbols and reveal the bonus feature of the Secret Tomb can win and win big. Additionally, Jane can lead the player to the wizards that give them powers to unlock the door to the Tombs of Katun, where mystical orbs provide the gifts of time – past and future. Indiana Jane and the Golden Tombs of Katun slot game is a one of kind 25 pay line slots game that has a historical progressive jackpot. 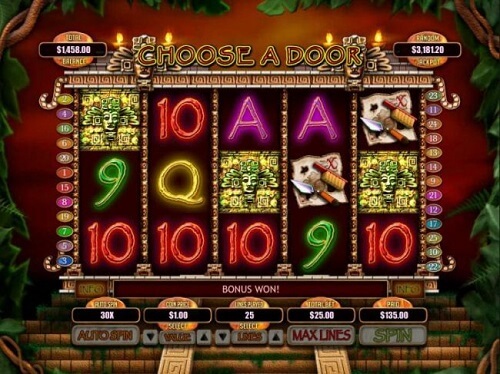 How to Play Indiana Jane and the Golden Tombs of Katun

Players can play anywhere between 1 to 25 lines, with the default setting being 25 lines. The player must play lines in sequential order and they are not able to choose lines that are out of sequence. The features of the game include locating three scatter symbols that can appear on reels 1, 3 or 5 and that triggers the Secret Tomb Bonus feature.

Also, the player will have to choose a scatter, which reveals the number of picks that they will be able to choose from during the next round. Another feature of the game is the tomb sphere which will appear in a second screen. When that happens, the player will have to select the tomb spheres until they reach the number of picks from their prior selection. The player is awarded the amount they have accumulated in free spins and multipliers, in addition to 3 free spins and a starting multiplier of 2. Each of the prizes received are multiplied by that particular multiplier.

As with many casino slot games, the scatters pay in any position in Indiana Jane and the Golden Tombs of Katun, and the scatter wins are multiplied by the total wager. Each player is eligible to win the random progressive jackpot on every spin. The progressive jackpot wins are added to the player’s current wins each spin. Each of the wins is paid on the lines that are played except the scatters which are added to the total amount of line wins. Also, the highest win that is paid can be on any line except where scatters have appeared. Each of the wins that a player has is multiplied by the amount of betting credits per line with the exception of the scatters.

Play Indiana Jane and the Golden Tombs of Katun Online

Indiana Jane and the Golden Tombs of Katun is one of the most exciting games in the realm of online casinos to come out in quite some time. Go and explore the treasure with Jane and walk away with some of your own!