Whether you’re a fan of the Three Stooges or not, RealTime Gaming will make you a fan by the time you finish playing their slots game. A 5 reel, 25 payline progressive video slot, the Three Stooges game comes with a scatter, a wild, a multiplier, a free spin feature and a maximum jackpot-winning possibility. Players can nyuk, nyuk, nyuk their way to wins and more wins. RealTime Gaming has capitalized on one of the most well-known comedy trios of all time in this slot game.

United States players will love the Three Stooges slots games. This particular slot game includes Moe, Larry and Curly, but also includes symbols such as pies, hats, vintage phones, film rolls and all of the other interesting components that made the Three Stooges such a dynamic trio to watch on the screen. The slots game also comes with a progressive jackpot that makes the game even more exciting. The wagering amount begins at $0.05. While not necessarily a high roller’s preference in betting, that does not mean the slots game does not provide engaging thrills and with the growing jackpot, that is all the more incentive to play the Three Stooges slots game. For more on the slot read our review below. 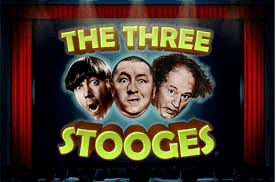 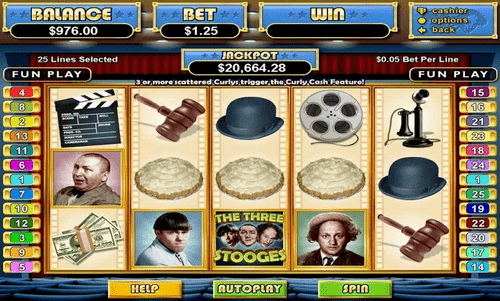 The wild symbols in the slot game are The Stooges themselves, who surprisingly have a more serious role in the game as opposed to being comedians as they assist the player in replacing the other symbols to form winning combinations. The Three Stooges can substitute for all of the other symbols except the scatter symbols and they also support the player in ushering the progressive jackpot when five of them show up on a payline. The wild symbol also causes the player to receive triple their winnings.

The Three Stooges slots game has three distinct features known as Moe Money, Larry’s Loot and Curly Cash that award multipliers or free spins, or a combination thereof giving them a reason to smile. This is unlike other slot games in that it has three specific scatters as the ones aforementioned. The Three Stooges is an impressive slot game that seeks to make the player laugh and chuckle while earning money with engaging features.

Whether the player is a fan or not, they will find the Three Stooges slot game one of the best slots they have ever played with its many specific features that encompass the culture of the trio that are legends in the area of comedy and vaudeville. The Three Stooges slots game from RealTime Gaming is a guaranteed hit in the eyes of casino players and all fans of the trio.

RealTime Gaming definitely has a hit on their hands and they knew this when they designed and created it. The Three Stooges slots game is quite a funny and whimsical experience for players who are seeking to make money while smiling at the same time. There is probably not another slots game like this that can be played at any casino.