The 2 Million BC Slot Review

The 2 Million BC slots game is a 3D, 5 reels, 30 payline non-progressive game from Betsoft. The slots game comes with a free spin feature and a maximum jackpot-winning ability of $7,500. Casino players who have ever wondered about cavemen can experience it with this game that provides exceptional graphics and animations that offer an interactive experience.

The game features the typical caveman, cavewoman as well as a sloth. The particular star of the game is the caveman, who is standing by to jump up and down whenever the casino player wins. If the casino player leaves the caveman alone for too long, he will become angry, bored and agitated. The game’s 5 reels feature pottery, gemstones, cave drawings, the caveman’s club, stone carvings of a sabertooth tiger, the sloth and stone wheels. Betsoft created the screen to have a leafy border with has vibrant greens and a clear sky topping off the landscape.

How to Play the 2 Million BC Slot

Casino players can choose from one to 30 paylines, alter the rate per line between 1 to 5 credits and also the coin range, which spans from 2 cents to $0.50. The 2 Million BC slots game has three features that are activated by acorns, diamonds or campfire symbols that appear on the reels. When an acorn happens to appear, the sloth collects and stores it in the top left-hand corner, and once the casino player has collected three of them, the sabre attacks feature starts with the caveman climbing to the top of the reels. The casino player must time his or her attack correctly in order to launch an acorn to knock the tiger unconscious. If the casino player is able to do this successfully, they will obtain a significant amount of money.

The 2 Million BC slots game also has a diamond bonus feature which contains a multiplier. When the casino player obtains three diamonds, they are awarded 200 credits, when four diamonds appear, they are awarded 5000 credits and five diamonds award 1000. This is then boosted by the methodology that the casino player selected to retrieve the diamond from the mouth of the tiger. The simplest feature in the slots game is when the casino player stumbles upon three campfire symbols on the reels. This rewards them with the game’s free spins which tend to reward a prize after each respective spin. No other involvement is needed on this particular feature and the caveman is shown as going to sleep as the action plays out. 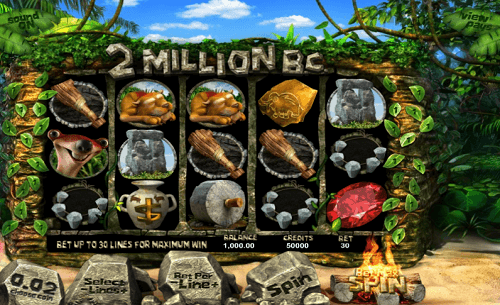 Play the 2 Million BC Slot

Betsoft has once again created a slots game that is impressive, exceptional and engaging. From the diamond bonus feature to the general play, casino players that are seeking an entertaining game will find this one agreeable and exciting because of its dynamic graphics, background and theme as well as the capacity of winning.

Additionally, the maximum jackpot-winning capacity makes this 3D slots game even more fun for casino players who play online. While it may not have a progressive jackpot, that should not fool any casino player into thinking travelling back to the caveman days isn’t great, because the 2 Million BC slots game from Betsoft is another one of a kind ingenious creation from one of the leading online entertainment gaming companies.