The Under the Bed 3D

One of the top games at Bovada Casino is the Under the Bed 3D Mobile Slot. A BetSoft Gaming mobile slots, the Under the Bed 3D Mobile Slots is a game that allows the casino player to find reel symbols that bounce into life when winning combinations are lined up. The mobile slots game has some of the best sound effects on any type of slot game of this kind. Casino players will find this game very entertaining.

Under the Bed Slot Features

The slots game has bonus games as well including the Sticky Wild Bonus Feature, where during this particular game, the casino player has to make a winning combination with any of the monsters that have a special yellow rim around them. Any of the symbols that have this rim will flip over and the will be wild for a random amount of spins.

The wild is held in place while the symbols spin. After each particular spin, the number will go down until the symbol eventually begins to flip back over. The second feature in the game is the Under the Bed Bonus Game, which is the bonus round that is triggered when three or more of the symbols of the bed appear in view anywhere. This feature is considered by many casino enthusiasts to be very cinematic and the casino player is given the task of turning over cards to reveal monsters.

Each of the monsters that are revealed come out to frighten, Jesse and Jane, the characters in the game before disappearing once more. The round is finished when the casino player finds all of the monsters or the word Collect is shown on screen. 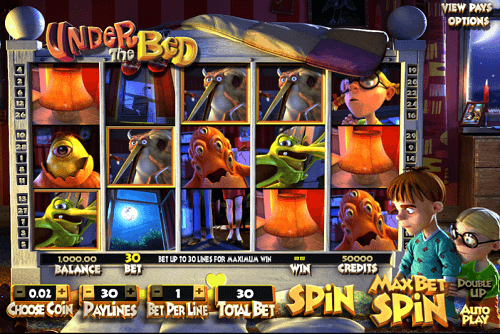 Play Under the Bed at Best USA Casinos

The Under the Bed 3D Mobile Slots game at Bovada Casino is considered to be one the most exciting games that a casino player can play and the amount of winning chances available to the casino player by playing the game are many!


Home » Under the Bed Slot Review