Moreover, this slots game is striking in appearance with two strong soldiers that appear as well as a red-haired Viking girl that actively participates in the slots game. The Viking girls cheer for the casino player as he or she is playing. While commanding the two Viking men to do what they can in the special features of the game. There are quite a variety of features in this Betsoft slots game, despite the fact that this game does not have a wild symbol that substitutes for other symbols. Find out about the Viking Age slot game by reading our slot review online below. You will find out how to unlock the various bonus features that are available on the reels. So, continue reading about the Viking Age below.

But that should not stop the casino player from engaging in the Viking Age slots game as three scatter symbols trigger not one, but two bonus rounds as well as multipliers and free spins. There then is no way for the casino player to get bored if he or she decides to play it.

Casino players can bet within a range of 2 cents all the way up to 50 cents. Casino players can also utilize up to a total of five coins per each of the game’s 30 paylines. Additionally, casino players can choose which paylines they want to play on. Casino players may find themselves disappointed given the game has no wild symbol. When the free spins round is triggered, the two Viking men reveal several multiplier reels on the stone pillars that allow for some serious wins to be gained.

The game is quite generous. There is an arm-wrestling feature in the game that is triggered when symbols that are corresponding show up on the reels. This prompts casino players to choose the stronger of the two Viking men and guess the outcome on the basis of a coin toss. This particular bonus round provides casino players a decent amount of winning possibilities. 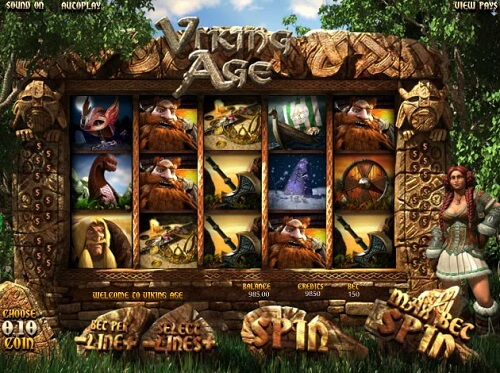 It is interesting to note that there are no wild symbols in the game. Which is quite unusual for Betsoft to do. Especially give how well-known it is among the online and traditional gaming communities. Casino players as previously stated may find it odd. However, that does not cease winning from occurring nor does it stop big wins from happening either. The Viking Age slots game is a fun and exciting slot game that everyone can play. From the high roller to the casino novice, the Viking Age slots game has the ability to captivate while giving out some very good winnings. This slots game is available at all casinos that are powered by Betsoft.

Play Viking Age Slot at Top BetSoft Casinos in the US