Charms & Clovers is a slot review that was developed by BetSoft. It has an Irish-theme with beautiful graphics. When you play this slot game perhaps the luck of the Irish will be on your side, and you will be able to score not only the base game jackpot but the progressive jackpot too.

However, before you can get excited by the jackpots that you can win with the Charms & Clovers slot game, you have to know about the gameplay and bonus features. You can definitely look forward to the best gameplay and interesting bonus features while playing the game. So, how about you find out more about what you will find on the reels of Charms & Clovers in our slot review.

What’s more, once you know the ins and outs of the game, you will find a list of the best BetSoft casinos where you can play the Charms & Clovers game for real money.

Unlike many slots, the Charms & Clover slot game features a sixth reel. However, it is laid out in a different way where it stands alone from the rest of the reels. The game has 40 paylines for matching winning combinations.

On the reels, you will see theme-related symbols and standard card symbols. However, you will also notice that there are also symbols that appear only on the sixth reel. The symbols are the money, mega symbol, golden bonus and the pots’o gold symbols. To find out more about these symbols, read on below. 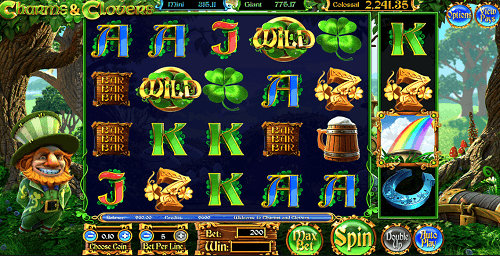 The wild symbol will substitute for all the symbols on the reels except for the sixth reel bonus symbols. It is the highest paying symbol on the reels with a maximum jackpot of 10,000 when you have six appearing on a payline.

This symbol appears only on the sixth reel, and it triggers the regular wheel which you spin to reveal prizes. You can be awarded 4x, 5x and 15x multipliers. On the regular wheel, there is also a chance to land on the super wheel, which awards a mini jackpot or a 40x multiplier. It does not end there though; there’s also an opportunity to land the mega wheel where you can win a 100x multiplier or a giant or colossal jackpot.

Trigger this bonus feature on the sixth reel, and you will be awarded eight free spins. For each free spin, you can be awarded up to three wild symbols on the reels.

Trigger this bonus feature on the sixth reel and a second screen will appear where you will have to choose one of five pots of gold. The prize on the pots is a multiplier that can reach up to 20x.

The Charms & Clovers slot definitely has the charms to keep you spinning the reels. It has features that will help you boost your bankroll and make for great gaming. The added progressive jackpots make it worth trying out your Irish luck, and maybe you can strike it rich if you are playing for real money. Find the Charms & Clovers slot at the listed site below to start playing.