Casino players wanting to experience a slots game that is profoundly created will find Dino Might slot quite interesting. The slots game is a 5 reel, 25 payline from Microgaming that is a video game. It comes with a scatter symbol, a wild symbol and a multiplier.The maximum jackpot potential win of $40,000.

The Dino Might slots game takes casino players back to the land of dinosaurs with its graphics and sounds. The sound effects are very realistic and the background of the game encompasses a variety of color. The slots reels spin with Jurassic action and thrilling roars. Microgaming left no stone unturned with this particular slots game creation. For more on the slot read our review below.

The Dino Might slots game’s scatter symbol is the amber fossil. This particular symbol lands in the 3rd, 4th and 5th reels only and can come in any position. This particular symbol in the game unlocks the match bonus round, which subsequently starts a game in itself. This match bonus game is played by the casino player picking blocks from a puzzle until they match a total of four of the same symbols in order to win up to 20,000 coins.

This game offers casino players a mighty multiplier which also boosts the amount of wins that have occurred in the slots game. If the casino player obtains three, four or five of the symbols of the Triggersaurus, then the Reel Bonus feature starts. In this feature, the casino player selects a dinosaur and seeks to reveal a winning prize. The casino player can win up to three picks on the slots reels. 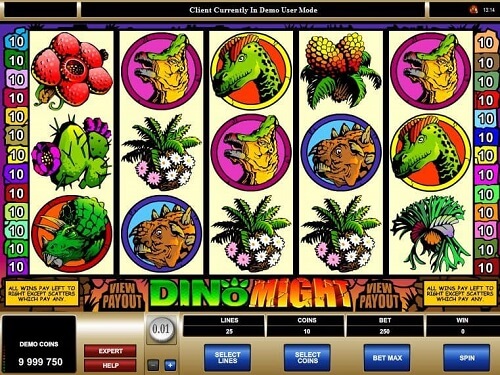