Untamed Crowned Eagle is a slot game from Microgaming that is impressive and skillfully created. This particular video slot game comes with 5 reels, 243 paylines and is a non-progressive video game. It includes a scatter symbol, a wild symbol, a free spin feature as well as a maximum jackpot of $5,625. This slot game is another in the series of Untamed games from Microgaming.

There are a variety of features that players can get excited about. The visuals of the game are professionally done. The eagle symbols look as if they are a part of a photo album. It is not until the player starts playing that it is realized that the symbols are indeed animated. The other symbols in the game include the 10, Jack, Queen, King and Ace symbols as well as eagle eyes, a close up of the eagle’s feathers, eagles that are in their nest and a mountain scene. Animal lovers will find this slot game one of a kind because of its specialty theme.

The sounds and graphics are serene, providing an interesting take on online slots games that are traditionally full of hustle and bustle. The Untamed – Crowned Eagle video slots game is one that will take casino players on a nature journey that they will come back to again and again. For more on the slot features and bonuses, read our review below. 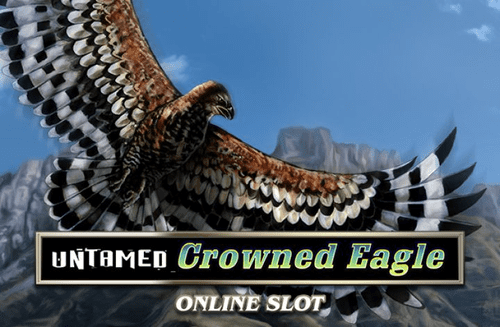 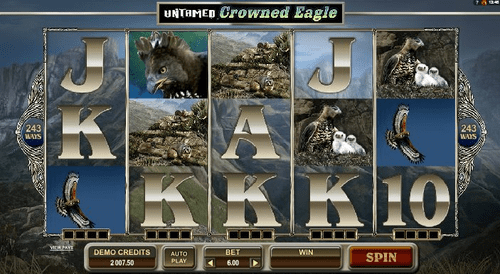 How to Play Untamed Crowned Eagle

The betting options in the game include the format of the 243 paylines that command bets of up to 30 coins or more per each spin. The player can go up to 600 coins if they want to wager larger ones. The value of these coin bets can be changed as well, giving the Untamed – Crowned Eagle slot game an edge with high rollers and low rollers. There is also a panel in the slot game where the sounds and graphics can be adjusted and an autospin feature.

The features in the Untamed – Crowned Eagle become very useful to the player. First, there is the wild symbol, which substitutes for other symbols with the exception of the scatter, to form winning combinations. Each one of the symbols that shows up adds to the counter that is situated below the slot reel. As soon as the player collects a total of four of the wild symbols, the reel turns wild as well as triggers a respin feature.

The eagle eye symbol operates as a scatter and rewards the player with 15, 75 or 750 when three, four or five of them show up on the reels, respectively. These symbols can also trigger the lucky nudge feature in the game, which first starts at the reels and nudges them to trigger additional free spins.

The free spins feature also yields the player with even more free spins when the scatter soars to three or more on the reels. These particular free spins also benefit the player when the game sounds a soaring eagle effect and this will multiply the prize by up to a total of 10X. In addition to these winning opportunities, the crowned eagle can assist players as well. This happens during the game’s gamble feature, where the odds are in the player’s favour tremendously.