A Review of the Starscape Slot Game

The Starscape slot game is one that allows players to go where no man has gone before like Captain Kirk and others have gone. Players can win up to the slot games’ jackpot of $70,000. This 5 reel, 25 payline video slot game from Microgaming is one of the most engaging and thrilling slot games ever.

It is a non-progressive slot game centered on the TV show with the outer-worldly crew. Microgaming designed it with precision and detailed effects and graphics that will undoubtedly thrill players of all types. Whether the player is a fan of sci-fi or not, the impression that this Microgaming game gives is one that will leave them speechless.

Space is the background for the Starscape slot game, which is a dark lit abyss. The control panel in the slot game is one that is uniquely crafted and designed in a spaceship look with a simulator that doubles as a coin selector.

The symbols in the slot game are the planets such as Mars and Jupiter as well as the sun, moon and the asteroids to name a few. Other symbols include a spaceship, a logo of a starscape as well as the traditional symbols such as the 9, 10, Jack, Queen, King. The symbols flash when a payout has been won.

Each spin in the Starscape slot game offers a similar sound to the TV show Star Trek’s tricorder. Players that are science fiction fans will be blown away by the similarities of this game with TV shows of a similar vein in addition to the Starscape TV show.

Players can bet starting at one penny and go all the way up to $250. Players will probably not find another type of betting range than the one in the Starscape slot game.

The special features in the slot game are of course the wild, which is the Starscape logo that doubles any win it produces when it happens to substitute for other symbols to make winning combinations. The symbol also happens to reward the player with the largest prize on the slot reels – 7,000 coins.

Three or more symbols of the spaceship give the player a bonus round. The player is presented with a galaxy spread over 25 different squares. Each respective square hides a symbol and the player must choose randomly until four that are identical are discovered. 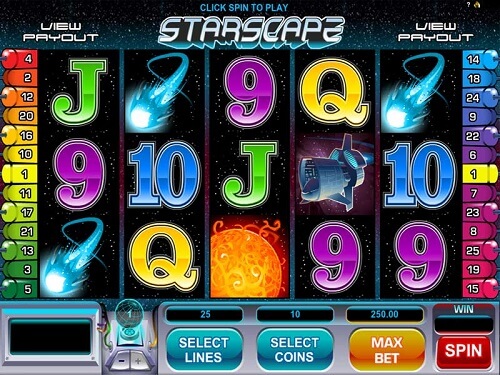 Those stargazers and fans of everything oddity will find the Starscape slot game as one of the most vast in terms of animations and themes. Microgaming has once again outdone themselves with creating a game that is off the charts. Players can win a significant amount with this Microgaming creation all while experiencing an out of this world journey and technological experience.

Microgaming is known for creating slot games that are interesting and fascinating, and sometimes over the top in their precision. The Starscape slot game is just another one of their many impressive and dynamic slot games that afford players many ways to win!